← more from
Other People LLC
Get fresh music recommendations delivered to your inbox every Friday.
We've updated our Terms of Use. You can review the changes here. 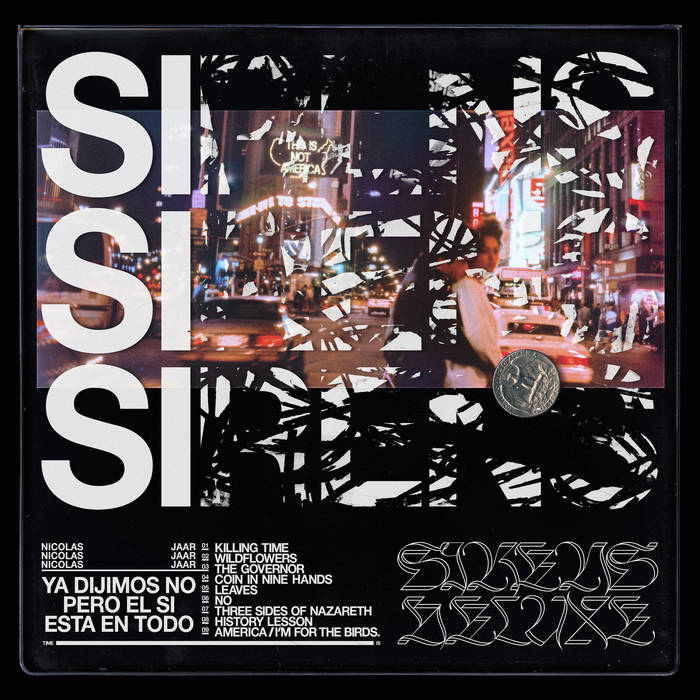 The first sound on Nicolas Jaar’s new record Sirens is a flag whipping in a gale. It’s the sort of sound you don’t realize you know until you hear it. But it’s unmistakable. And pregnant with meaning: nation, memory, conquest—but also frailty, a delicate thing buffeted by mercurial winds.

The second sound is breaking glass.

Nicholas Jaar has been busy. Since 2015, he’s released Nymphs, a series of four EPs, and Pomegranates, an alternate soundtrack to Sergei Parajanov's 1969 film The Colour of Pomegranates. If Nymphs and Pomegranates represent two sides of the coin of Jaar’s work—club and experimental ambient respectively—Sirens, he says, is“the coin itself”: the terrain, the constraints, the material conditions from which the others emerge.

Sirens is animated by an ambivalence at the heart of American music: that, in some fundamental sense, the history of American popular culture is a history of theft. The six lush tracks move seamlessly from rock to reggaetón to doo-wop, each exhibiting Jaar’s signature sensitivity to restraint and exuberance, disjuncture and groove, comfort and disquiet. Foregrounded throughout is the question of what these forms—artifacts of empire and its resistance both—can do for us today.

Jaar, whose parents lived under dictatorship in Chile and whose grandparents are Palestinian, ascribes to Víctor Jara’s philosophy that you’re making political music whether you want to or not. The injustices of the past weigh heavily on the living, structuring the possibilities of the present. As Jaar sings, “we’re all waiting for the old thoughts to die.” For now, they’re our thoughts too.

Jaar composed and recorded all the music on Sirens himself, with one exception: a sample of the Andean folk song “Lagrimas”—tears—which appears, almost unadorned, in the middle of “No,” the fourth track on Siren. “No” recalls the Chilean national plebiscite of 1988, when artists and activists organized millions of Chileans to vote “no”to the dictatorship of Augusto Pinochet. The song is a meditation on the seeming futility of protest against systems that structure our very reality.

Over a loping reggaetón beat, Jaar laments, “ya dijimos no, pero el Si está en todo.”We already said no, but the Yes is everywhere.

The songs on Sirens are fiercely critical, but they are generous too, even loving. “I made these songs to play for my friends, for people going to see music,” Jaar says. The place he wants to be is liminal: between the precious sense of freedom that only music can provide, and the reality that there’s no escape; between “knowing that we’re trying to get away and knowing that we can’t. That maybe,” he says, “we shouldn’t.”

After the glass shatters, a rush of sound, fluttering pianos and synth mingle with the shards. The shimmering music billows and quiets. There is calm.

Then the glass shatters again.

Bandcamp Daily  your guide to the world of Bandcamp

Frayle's Gwyn Strang and Sean Bilovecky join the show to talk about their cathartic new album.